Many are marsh plants and usually have +/-triangular stems or leaves in three ranks or V-shaped in section; flowers non-descript brownish/greenish without obvious 'petals' (what they have are called 'tepals') - often have male and female flowers distinct.

Note if lvs ONLY hairy on edges go to Woodrushes :

Dense terminal spike (of 1-many similar spikelets), sometimes with round stems

But see also other possibilities for apparently tubular leaves/stems: 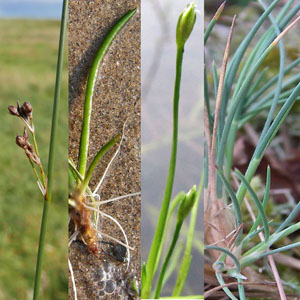 Branching from a point
Branched branches
Singly along the stem

Spikes in umbels (mostly branching from a point)

Spikes arranged along the stem

NB If stems not triangular also try other cylindrical leaves

In saltmarshes, Sc (esp. NW), N En and N Ire, with rather flattened inflorescence but <10 spikelets

Common in muddy estuaries by the sea; sharply three angled stem
Similar, but with round stems are :
Schoenoplectus

Well over 70 spp. are recognised in the BI; only a representative selection are shown here.
For a key see: Key to sedges

Creeping with plants characterstically aligned along rhizomes on sand dunes; lvs as long as flowers; common around the coasts of BI

Local on mountains above 720 m

To 1.2 m; dense tufts with dead red-brown lvs around base; female spikes separated; Utricle with green lines down each side; common throughout BI esp. N & W
c.f. also C. hostiana

Local on mountains in N En and Sc

To 1m; by coasts around BI

Similar to C. caryophyllea but with dark, rounded glumes; v. local on calcareous grass from Westmoreland to E Anglia

A rare plant of coasts of NE Sc

As the name suggests: a very common sedge throughout the BI; has only 2 stigmas

A very local small plant of well drained soils on limestone esp. in Cumbria and region

Sharply angled stem >2 mm wide; around the coasts of BI

Hairy and pale leaves; widely distributed in damp grassland and by streams

A large tussock sedge to 1.5 m tall; fruits with wings and ligule straight across (arrows); by lakes, streams and marshes throughout BI

Rich soils in damp woods esp. in S, though a garden escape throughout BI

A low-growing tufted sedge, with rough fruits; common throughout BI on sandy or peaty grassland

Local in mountains of C Sc

Locally common in base-rich fens, scattered throughout the BI but mostly in W Ire and W Sc, only in E Anglia in the E

Scattered in Ire and S Br

Locally common in wet areas in S En and CI

Rare on bare mud in a few locations in CI and S En
Two other cultivated spp. can persist in the wild

Established locally around London, in the SW and Jersey

Can escape and persist in water for a short time

Underwater can look v. similar to Pilularia which has no lf sheaths

Common in marshes, and wet areas; has more than 20 vascular bundles in the stem (appear as ridges on dry stem)

This is a very rare plant of NW En, found e.g. in Ribblehead quarry - has < 20 vascular bundles in the rather fragile stem (appear as ridges on dry stem). The RH pic compares flowering heads of E. palustris and E. mamillata:

On acid streams and pools, mostly in N

Can confuse with the aquatic form of J. bulbosus

Has only single flower head and expanded sheath below flower

Densely tufted short plants (8-15 cm) with v. short leaves from base only

Ire and W coast of Br

Generally have three stigmas; common in shallow water throughout BI

These have 2 stigmas and tiny (use lens) dots on glume (cf. S. lacustris); common in marshes mostly near the sea
Similar, but with triangular stems are : Bolboschoenus

Very rare - only known in c.4 sites in Perthshire:

Rather local on streamsides and woodland throughout BI exc. N Sc